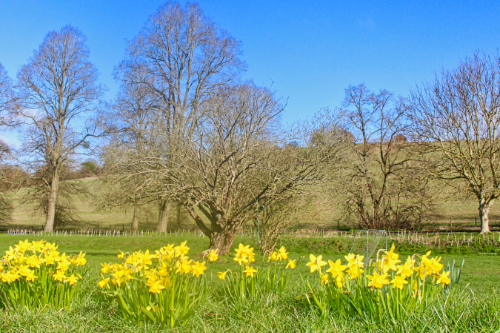 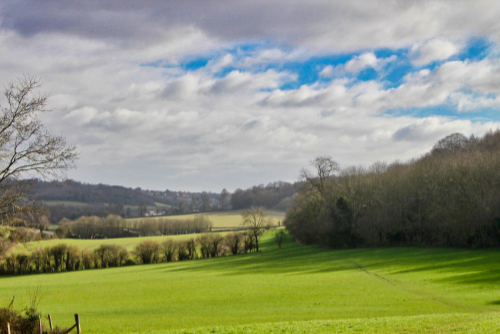 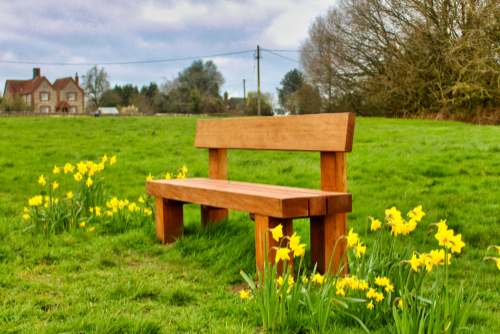 Piddington and Wheeler End is in the heart of the chalk Chiltern Hills, only 2km west of the famous historic National Trust village of West Wycombe. The parish lies across the A40, extending from Chawley Farm in the north, across the Radnage ridge, down into the A40 dry valley at Piddington, and south up onto the high plateau at Wheeler End. It has a large proportion of woodland, most full of bluebells in the spring.

Historical documents dating back to 1643 appear to publish details of a raid on West Wycombe.

There are many footpaths leading out to the fields and woods in all directions, and the parish includes the Open Access area of Wheeler End Common. The nature reserve in Bottom Wood is just beyond the parish boundary to the north-west.  See  archived website and  https://en.wikipedia.org/wiki/Bottom_Wood

There is usually parking available along the Old Oxford Road to the west of Piddington, a popular starting place for walking groups, sometimes finishing with lunch at the Dashwood Arms pub. This guided walk passes through Bottom Wood.  Suggested walks from Wheeler End include one west to Tipping Shaw Wood and one east to Great Wood.

On the southern edge of the parish is the wooded Cadmore End Common, another large Open Access area which has patches of forget-me-nots as well as the usual masses of bluebells. It is also has several ponds, which are rare on the Chilterns, because it is on a patch of younger clay above the chalk so the water cannot soak down into the porous chalk.

The parish only got its new name after 1970, before then it was simply called West Wycombe (rural). In 1895 there was a proposal to put Wheeler End into Lane End civil parish, but the residents petitioned against it, they wanted to stay in West Wycombe.

Piddington is (unusually) a very recent settlement, the first houses only date from 1903, but it is right on an ancient routeway from London to Oxford and the north-west. Roman metal objects and coins were found in the fields east and west of Piddington, and in Fillingdon Woods to the north-west so it was probably right on a roman road. At the top of the hill, within the parish, there was a Medieval settlement 60 metres across, inside a circular ditch which can still be seen. It had several buildings inside, a dovecot nearby, and a well where several bodies were found, probably victims of the Black Death. The road is shown on a 1675 road atlas, from London to Aberystwyth.

Piddington is at the foot of a steep hill, various routes have been made to get up the hill over the years :-

Wheeler End is shown on the 1770 map, already looking quite similar to today with the two widely spaced roads and a huge common between them. On the 1851 census almost all the men of the village were labourers, probably mostly on the farms, and almost all the women and girls who worked were lacemaking.  Nine men in the village made chairs, the early days of a new industry.  There is a large guide to the history and buildings of Wheeler End here .

There was a large brick-making industry in Cadmore End Common just outside the parish, until the local clay ran out in 1939, so some of the Wheeler End labourers may have worked at this, and the village pub was called the Brickmaker’s Arms.  It is described here  Cadmore-End-Common-Conservation-Area

The village of Piddington was only created in 1903 when Benjamin North’s furniture factory had to move here from West Wycombe, because the railway company took back the land he was leasing for a timber store.  Mr North bought enough land for the factory and housing.  The early photos on the SWOP  website from 1903 show that all the present car parking area on the industrial estate was used for the timber storage.  Piddington only grew slowly, so most workers still had to commute in, many walking down from Wheeler End. The North factory made many of the stools and chairs used by the guests at the last three coronations in St Paul’s Cathedral. Davison Highley took over the tenancy in 1980, they make high end furniture and bespoke items, including the sofas seen on TV programmes such as BBC Breakfast, the One Show and Graham Norton.

The road joining Piddington and Wheeler End is Chipps Hill; halfway up the hill is Chipps Manor, belonging to the Dashwood Estate. In 1946 West Wycombe House had become so run-down and expensive that the 10th baronet Sir John Dashwood lived at Chipps Manor for a while.  His son Francis (later the 11th baronet) lived here with his family until 1963.

Wheeler End was in the national news in 2008 when the Huckenden Farm recording studio was sold.  It had been used by many famous musicians such as Paul Weller, Oasis and Robbie Williams to write and record albums, see  Daily Mail story. Then Amy Winehouse was in talks to buy it, but it is now a peaceful estate, on the minor road from Wheeler End to Cadmore End.

A History Of The Routes Through Piddington

Royalist Account of Chalgrove and a Raid on West Wycombe

A history trail around Piddington

A Tale Of Two Furniture Factories

Men of Piddington who served in the First World War

Two authors have just produced the first-ever history book for Piddington.  It describes the history of the site from Roman times, then covers the 3 generations of the North family starting from absolute poverty but they managed to grow a huge furniture business in West Wycombe, then had to move to a new site and so founded Piddington in 1903.  There are 13 photos from inside the Piddington factory and the original floor plan.  The book covers Piddington life including during both world wars and up to the present day.  Please contact simon.cains@gmail.com if you would like to consider buying a copy.  It is 99 pages, A4 size, for £12 with any profits going to the Village Hall. 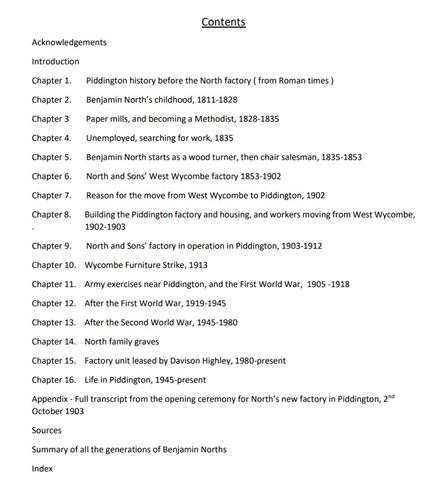 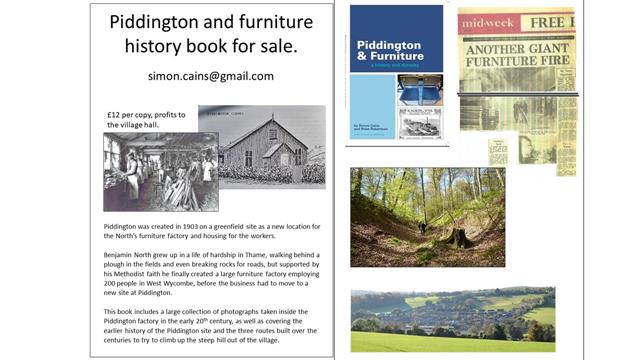